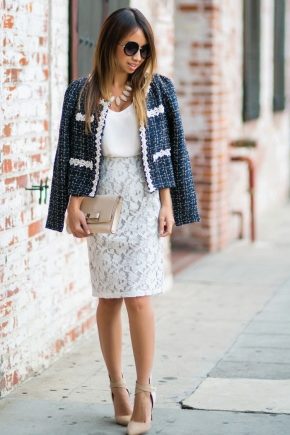 Jackets have appeared a long time ago, initially being an attribute of only men's wardrobe, making up a set with classic trousers that were not customary for women to wear. But with the passage of time and changes in fashion trends, jackets began to be popular among the fair sex.

Initially, girls wore jackets only in a pair with a skirt, and a little later with trousers that make up a pair of suits with him. But, as previously mentioned, fashion does not stand still, and now the jacket is used as a separate piece of clothing that lives an independent life. Let us consider in more detail the most popular models of jackets, as well as the most stylish images combined with them.

A tweed jacket is a classic British version of a sporty type jacket, since such a fabric as tweed is of purely British origin. Models of the classic cut are usually made from tweed and often they are used as a variant of outerwear in cool weather, since the tweed fabric has a characteristic coarse pile and an appropriate structure.

In order to create a contrast in the image and in order to avoid an excess of tweed blazer is best combined with any light fabrics, as well as with products from cotton. So your image will be discreet and elegant, and if you add light, sophisticated accessories, you can add a touch of romanticism to the image.

Properties and appearance of tweed

Tweed fabric has its roots in Scotland, where it was originally used exclusively for men's clothing. The fabric received its name due to the river flowing in Scotland, where wool was washed, from which tweed was later made. It is a wool fabric with a small pile.

Being a warm woolen material in structure, tweed is used to make things quite suitable for use in cool weather as outerwear, for example, world-famous tweed jackets.

Of course, among the abundance of fashionable clothes at the present time, designers have not spared the jackets, developing new types of models. We present to your attention the most popular and stylish models of tweed jackets this season, which will not pass by any fashionista.

English style is a classic option for a jacket, usually with a single-breasted or double-breasted collar. In addition, the classic English model, fastened with three or more buttons, is quite popular this season. Such a jacket can be both standard length and elongated, and shortened, and it will still look stylish and fashionable.

It is worth noting that this model jacket is suitable for both slender girls and owners of magnificent forms, especially if it has a slightly free cut. Which, by the way, is quite rare, since the English style is characterized by strict fitted jackets.

Elbow pads for jackets have been used for a long time, although they used to be extremely functional in protecting the elbows of a jacket against wiping cloth, and coats with elbow pads most often enjoyed success with hunters and fishermen.Later, over time, and changing fashion trends, such a jacket began to be worn by almost everyone, because people quickly realized that this thing, in addition to its functionality, also has an attractive appearance.

A tweed jacket with elbow pads can be combined with many things, for example with turtlenecks, blouses, shirts and even regular T-shirts, in any case it will look stylish and sophisticated.

This model of tweed jacket is especially popular in the cold season, as it covers the buttocks and is more functional. Among girls, he is most popular, because it can be used both as a jacket, which it is, and as a tweed warm trench coat.

Nowadays, the variety of color palette in clothes is very large, since there are no restrictions whatsoever on the choice of a particular color. The only rule always and everywhere will be the relevance of the thing and its colors in relation to any event. But It is worth noting that in recent times are quiet natural shades, not conspicuous. Let us consider in more detail the most successful color combinations and color solutions in general.

Gray is ideal for a tweed jacket, because it is one of a number of classic shades, but it has an advantage over colors like white and black. The white color may be too branded for a jacket, which is not very convenient, as you will often have to resort to cleaning. Black color, albeit classic and fashionable at any time of the year, but it looks a bit gloomy. Therefore, gray, bordering between them, would be the most appropriate option.

This color has a very good, enviable quality, brown blends well with many other colors, mostly warm, light shades, because brown is also from the category of warm colors.

Blue is one of the representatives of a number of classic colors, but its combination with others is not as great as in the case of black and white colors. And yet the blue color goes well with many light and dark shades. For example, blue and yellow make up a fairly good refreshing combination. And also, all shades of green, purple and gray are perfect for blue.

Green color is quite popular because it is to some extent a warm summer color, and everyone wants to feel some heat in cool weather. The most popular shade of green in clothes is light mint, dark green, turquoise, some prefer malachite tint, but the main thing is to combine them with other colors correctly.

Beige, flesh-colored, cream-colored, as well as all shades of brown and ivory and champagne are perfect for all the listed shades.

Beige is a calm warm shade and does not tolerate a combination with bright colors, because it is immediately lost in it and does not quite fit into the image. Therefore, we advise you to combine a beige cardigan with light shades as warm as he is. For example, the color of ivory, light lemon, light peach.

Any fashionistas know that every outfit should be in place. And jackets are no exception, since not all models will be appropriate for a given situation. So let us examine in more detail what to wear and with what.

With trousers, a tweed jacket is ideal, just a little lower than the waist, fitted cut, with a double-breasted collar and a buckle on two main buttons, having two more decorative buttons. The image will be very stylish and elegant.

In combination with a skirt, you can use the same jacket, which is suitable for pants, because it will look good in both versions.In addition, you can use an elongated version, which in appearance resembles a trench coat and is more functional in retaining heat.

Regarding jeans, you can not worry too much, because they will be perfectly combined with absolutely any jacket model.

An excellent option in cool weather, to go to the office or to a business meeting, would be a tweed two-piece suit of dark gray or dark brown. The outfit can be supplemented with black boots with thick heels and a bag of classic style.

A stylish choice for a walk would be a tweed jacket of mustard color, in combination with a light white blouse, skinny jeans and boots to match the jacket, on a low thick heel.

A tweed jacket in a cage with brown shades, in combination with a black skirt and a white shirt will be an excellent option for everyday use. The image can complement both flat shoes and shoes with heels.

Interesting in the section "Jackets"

What can I wear with a pink jacket? 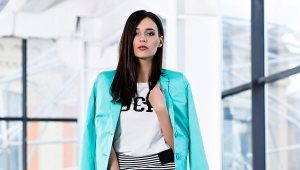 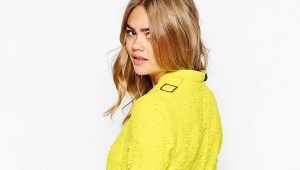 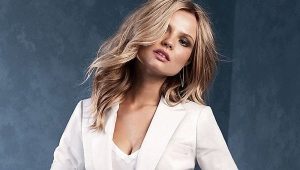